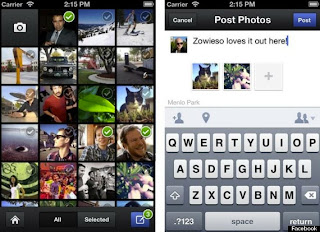 I'm not really an app kind of gal, and I refuse to pay for any.  When Blackberry had all those outage problems they offered some free premium apps as good will to placate those who were pissed off with the service.  So I downloaded some, and have never used them. And, frankly, if I'm going to edit photos, I'm going to do it on my computer using Photoshop.

Besides, most cool apps are for I-Phone, and my next phone will be an Android, so when I found out Facebook was creating a camera app for I-Phone, I thought- yawn.

Yes, you heard right, Facebook is expanding into other arenas- even though it tanked with its stock public offering-  and there's now an I-phone app for Facebook.

If you just have to have it, you can go to the Apple's App store to download it.

According to Huffpo, it

"...works like most other camera applications for smart phones. To take a photo, you tap a camera icon in the upper left corner of your screen, aim and shoot. You can then add filters, crop or tilt your photo, and share it on Facebook."


I'm not sure if there is a way to watermark the photos, but if I decide to put my art photos on Facebook, they get watermarked.

Apparently, the app is very similar to Instagram, which seems rather silly considering Facebook is willing to fork over $1 billion for Instagram, although the buyout has not been finalized yet and I have wonder if the deal will even go through. Considering their epic public offering fail.

As for Blackberry? No-one thinks of creating much for Blackberry. Android, on the other hand, might get a shot at an app. Facebook is:


I still wouldn't bother with it, when I get my Android.

Source: Huffpo
Posted by Jesspeterson at 12:23 PM No comments:

Another in my series of  'thinking outside the box' artists is Wisconsin photographer Jack Long, who has created some splash-paint photos called "Vessels and Blooms" that are exquisitely beautiful. Using high-speed photographic techniques along with different colored paints (dye, pigment and thickener mixed with water)  he has created these breathtaking creations that look like flowers you might find in outer space.

They remind me of Markus Reugel's work, though Reugels' is more delicate, and Heinz Maier.

He won't reveal his actual process, but he  says it takes months of prep and experimentation to get it just right, and then just a second with a flash to capture the images. 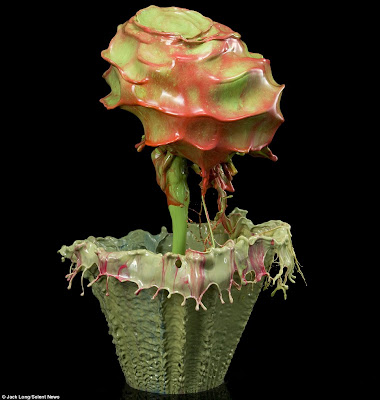 Time-Lapse Video Of The Earth At Night- From Space

Ever wondered what it would be like to travel and experience watching the earth from space? Movies don't quite cut it, but NASA has some amazing photos and videos on its website. This particular one was the Astronomy Picture Of The Day for March 5, 2102. It's actually a time-lapse video flying over the earth at night, and it's a major treat.

Posted by Jesspeterson at 7:50 PM No comments:

Google is making changes to Google shopping and it does not bode well for those of us who have our own websites or shops on places like Etsy. If you want to be on the top of google shopping search it's going to cost now, big time. Relevancy will be out. How much  you pay will determine where you place in search.


Google Inc unveiled major changes to its shopping business on Thursday that will likely prove controversial in the e-commerce world.

Google, the world’s most popular Internet search engine, will rename its service Google Shopping from the current Google Product Search.

“We are starting to transition Google Product Search in the U.S. to a purely commercial model,” said Sameer Samat, vice president of product management at Google Shopping. “This will give merchants greater control over where their products appear on Google Shopping.”


Google has been in the product listing and search business for about a decade. During that time, it has provided merchants with free access to shoppers. The company made money by running paid product search ads along with the organic, or unpaid, product listings, according to Eric Best, CEO of Mercent, which helps retailers sell through Google and other e-commerce websites such as Amazon.com Inc and eBay Inc.

“Today, that model goes away,” Best said. “It’s a very big deal.”
The changes may ultimately help Google extract more revenue and profit from its retail advertisers, which account for up to 40 percent of Google’s advertising base, according to Best and others.

“That’s the free sales that are going to disappear unless they decide to pay,” Scot Wingo, CEO of Channel Advisor, said.

Under Google’s new system, retailers may have to spend an extra $130 million a year in the United States and $270 million globally, to fill that sales hole, he estimated.

“The winner in this is Google,” Wingo said. “That extra spending is pure margin and will drop to earnings per share.”

Some of the retailers Channel Advisor works with are questioning Google’s motives, Wingo added.

The changes will kick in by October, which does not give merchants much time to adjust to the new system in time for the crucial holiday shopping season, he said.

For retailers, there are upsides and downsides, according to Mercent’s Best.
“The downside is that retailers are going to have to pay for performance when it comes to e-commerce traffic and revenue driven by or through Google,” Best said. “The free traffic is disappearing.”

The changes may be controversial in the Internet community because Google’s search results have traditionally not been influenced by money, Best said.

“Pay-for-placement to some degree is an alternative to purely organic relevancy results,” he said. “The fact that shopping results will be more closely tied to bid-for-placement will not sit well with all advertisers.”

The new program will help retailers make their products more visible to shoppers searching on Google. The old system was difficult for Google to police because retailers could list a lot of products for free. If they have to pay, it may reduce clutter, Best said.

“Having a commercial relationship with merchants will encourage them to keep their product information fresh and up to date,” Google’s Samat wrote in a blog on Thursday. “Higher quality data - whether it’s accurate prices, the latest offers or product availability - should mean better shopping results for users, which in turn should create higher quality traffic for merchants.”

The quality argument is suspect, according to Channel Advisor’s Wingo.
“That’s a slippery slope because this could apply to websites, not just product listings,” he said. “Why have organic search at all? Anyone can set up a website and use it for spammy purposes. That’s what Google is supposed to deal with.”

Amazon and eBay will likely be affected by Google’s changes because the e-commerce giants currently get a lot of free traffic from Google Product Search. In the future, they will have to pay for that, Wingo said.
However, some merchants may decide to list more products for sale on Amazon’s and eBay’s online marketplaces, which would be a boon for those companies, he added.

Google shares fell 1.3 percent at $580.86 on Thursday. The shares have fallen 13 percent since the beginning of the year.

Posted by Jesspeterson at 9:29 PM 3 comments: