camera, along with a snap on Raynox M-250 macro lens, he demonstrates what one can do with simple and not terribly costly equipment, imagination, patience and the ability to think outside the box. Although both the camera and the Raynox lens are discontinued, you can still find the camera on Amazon, for now, and the replacement for the M-250 is the DCR-250 Super Macro Snap-On Lens

, also available on Amazon for under $80.00 and compatible with most cameras.
Although it apparently took Schrayer 25 attempts before he finally got what he wanted, what he got was worth the effort.

'I focused on the wick, or the edge of the flame, had the shutter button half-pressed and ready, and blew out the candle and snapped very quickly.

'The built-in flash gave me head-on illumination of the smoke, and that head-on lighting allowed me to pick up the refraction through the droplets of wax.

'Any other angle of illumination would not produce the rainbow effect.

'Even with all that planning, it still took 25 attempts to get a decent shot of the effect.' Grover used a Fuji Finepix S8100fd, with a Raynox M-250 macro lens attached. Each image is shot at 1/1000th or higher.

'The camera's built-in flash provided the perfect head-on illumination that made the light refract through the wax droplets and back towards the camera in exactly the way that sunlight refracts through raindrops to make a rainbow.
'I only noticed the effect afterwards when looking through the images I had taken.

'But once I saw it show up on a number of photos, I decided to capture as many instances of it as I could for good measure.'

I truly admire those who know how to manipulate their cameras to create these fabulous abstract works of art.  I recently posted about German photographer Heinz Maier, another amazing artist, and his incredible water photography. They're an inspiration to us all, and a reminder that it's not the equipment that makes a good photographer, it's the imagination and artistry that lies within.  And at less than $80.00 a pop, I think I might add that Raynox to my list of equipment, though I'll stick to Canons.
Posted by Jesspeterson at 8:27 PM No comments: 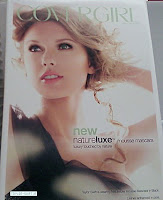 Another makeup company is being raked over the coals, this time for digitally manipulating a models eyelashes to make them look longer. The trouble is, it's for CoverGirl's Natureluxe Mousse Mascara which claims the product will create "2x more volume". Granted the ad apparently did mention at the very bottom, in small print, that the model's eyelashes had indeed been Photoshopped, but who reads all those disclaimers? Certainly not those of us who have to drag out our magnifying glasses to read labels that over the years have gotten increasingly smaller. And if it's a television ad, forget it.

The U.K. recently banned a Julia Robert's Lancome ad, along with a Christy Turlington Maybelline ad, for  misleading consumers.  This time the U.S. is jumped on the banning bandwagon, and out goes the CoverGirl Natureluxe campaign. Industry watchdog, and part of the Better Business Bureau- the National Advertising Division (NAD), decided to ban the ad.

As a result, Proctor and Gamble (owners of CoverGirl Cosmetics) claims it pulled all misleading ads, and NAD seems to be satisfied.

Women spend thousands of dollars a year trying to get that flawless model-perfect complexion and those extra long lashes; obviously an impossible task, and a major waste of money, since neither can those models.

There's a major difference between portrait photographers digitally manipulating a model's face for the artistic merits, but it's not okay for ad campaigns to claim something works when it clearly doesn't.


NAD director Andrea Levine told Business Insider: 'You can’t use a photograph to demonstrate how a cosmetic will look after it is applied to a woman’s face and then – in the mice type – have a disclosure that says "okay, not really." 'NAD was particularly troubled by the photograph of the model – which serves clearly to demonstrate (i.e., let consumers see for themselves) the length and volume they can achieve when they apply the advertised mascara to their eyelashes.'

Posted by Jesspeterson at 9:55 PM No comments:

As part of the London Street Photography Festival 2011, a group of photographers and videographers decided to conduct a little experiment on the limits of photographing in public and private space. Called Stand Your Ground,

On Tuesday 21 June 2011 six photographers were assigned different areas of the City to photograph. Some used tripods, some went hand held, one set up a 5 x 4.

All were instructed to keep to public land and photograph the area as they would on a normal day. The event aimed to test the policing of public and private space by private security firms and their reaction to photographers.

All six photographers were stopped on at least one occasion. Three encounters led to police intervention.

The following video demonstrates what happens when they start shooting on the streets of London.

It's somewhat understandable that security would be wary of people taking photographs of certain 'sensitive' buildings like banks. And perhaps they wouldn't have had such a reaction had there not been a videographer in attendance, as well. But it's interesting, nonetheless. I have been approached several times on questionable private property, which I did not understand at the time, but it was just easier to walk away than stand my ground. Perhaps I should have.
Posted by Jesspeterson at 1:02 AM 2 comments:

An Artist's Perspective On Food Photography

Digital-Photography-School.Com is a great source for information.  I subscribe to their list and receive emails every once in a while with tips and tutorials that I have found invaluable.  And all for free.  I just received one that included tips on food photography.  I admit I have tried taking photos of food and I suck. To be fair, it was only for fun, and usually spontaneously at a restaurant I happen to be eating at. This photo was taken at a restaurant in Quebec City while visiting for my parent's anniversary. It's colorful, but pretty boring. 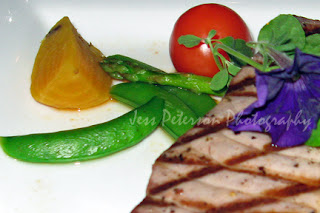 For those interested in making something extraordinary and dramatic out of ordinary food photography, this article gives some great tips on approaching it from a painter's perspective.

Will Kemp gives us 5 tips to better food photography:

1. Use a Single Light Source


This is very effective when you’re painting because it really helps to give the illusion of depth and that is one of the trickiest things to achieve when your trying to convince the viewer of your subject.


When you use one light source you produce lovely shapes of what are called cast shadows, as in the shadow cast by an object. I often study the shadows more than the subject. You don’t need an expensive light, the photo above was lit using a $5 torch.


You can use this technique when composing your photograph to try and keep it really simple, that way it looks more dramatic .

Here are the other 4 tips.
I'm going to have to do some experimenting.
Posted by Jesspeterson at 11:07 PM No comments:

It's always nice to give back, and I just came across this opportunity via an email from Photojojo.com about "Help-Portrait" Day, which falls on December 10th this year.

According to Help-Portrait's website, this is not about adding to your portfolio or making money by selling the portraits, it's about giving back to the community in need.  Taking a portrait of some needy individual or family and then gifting them with the photograph is the ultimate aim of the project.

They are looking for amateur and pro-photographers, volunteers and makeup artists.  Their website has all the information you need, including lists of groups that have already formed, all over the world. Or if there is no group in your immediate area they encourage you to create one yourself. Photojojo also has information and suggestions on how to get involved with this very worthy project.

There are so many worthy groups and organizations that would so appreciate having their members' photo taken-  for free.

Founded by Celebrity Photographer Jeremy Cowart, Help-Portrait is a community of photographers coming together across the world to use their photography skills to give back to their local community.


In December, photographers around the world will be grabbing their cameras, finding people in need and taking their picture. When the prints are ready, the photographs get delivered.

Yep. It really is that easy.

This is about GIVING the pictures, not taking them. These portraits are not for your portfolio, website, or for sale. Money isn’t involved here. This holiday season, you have the chance to give a family something they may have never had before—a portrait together.

Our mission? Our mission at Help-Portrait is simply to equip and mobilize you, the photography community. We want to make sure you have all the information that you need to successful participate in Help-Portrait on 10 December 2011. We want to help you find other people in your area that are wanting to be part of Help-Portrait or have already begun to plan the event. We want you to have the opportunity to give.

The best place to connect with other photographers, download important documents, and read up on some useful Help-Portrait planning tips is our COMMUNITY SITE.

Just in case you haven’t seen it, here is our video explaining the idea of Help-Portrait.

And an intro video for more info:

Posted by Jesspeterson at 11:06 PM No comments: