Texas based Tom Hussey, a commercial advertising photographer, beautifully photographed for a Novartis Exelon Patch ad campaign (a drug for mild to moderate Alzheimer's)  a group of older people staring at their former, younger selves in a mirror.  I'm not sure if these were models, or actual Alzheimer's patients, but it was very creative, and haunting.

Apparently, the campaign won a Gold Addy (award in advertising). 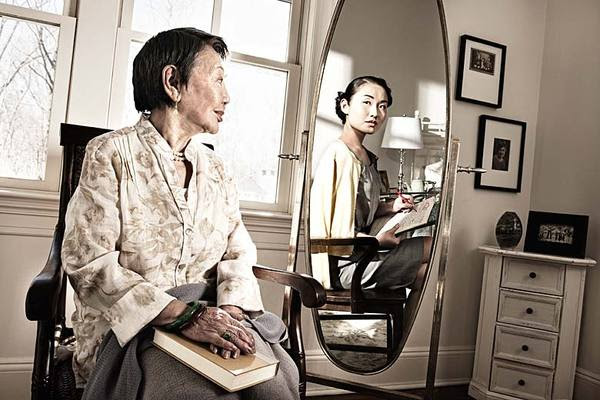 Alzheimer's is such a tragic disease for both the person who has it and the caregivers who are forced to watch their loved one slip away. I wrote a poem, quite a few years ago, about a friend's mother who had Alzheimer's. She has since passed away, but it was heartbreaking to hear the stories about how she became a shell of her former self.

ARE YOU STILL THERE?

There were slow, imperceptible changes at first-
repeated questions
and forgotten names
uncustomary outbursts of anger-
all cause for pause
but not concern.
“These things happen with age”, he thought,
recalling his own momentary lapses-
like the occasional trips to the store where he would stand
for an eternity it seemed
wondering, trying to remember what he had gone there to buy,
and he would laugh.

But then memories started to fade
and her essence began to recede
and the woman she had been
slowly disappeared
and his laughter stopped.

There were the good days when she knew he was her son,
and those he cherished.
The bad days he tried to forget
for all the pain and havoc they created.
They were agonizing times
with the endless worry and fear-
the wanderings, miles on end,
once with his young boy in tow
and the pots burned black on the stove
and the half recognition,
one day her son, the next a stranger-
Unbearable times.

Watching her now, with her child-like demeanor-
this mother, once strong and in control,
this woman who nursed and nurtured him,
acting like his own child.
Gazing at her, longing for recognition
her eyes stare back unrecognizing.
This mother, now child.
This woman, this mother, stuck in some twilight zone of her past,
giggling like a young schoolgirl.

He embraces this new child-woman she has become-
this other “being” wandering freely
within his mother’s fragile mind-
because it’s all he has left.

Hoping for those rare moments of lucidity
searching deep within her eyes,
he’s always left to wonder
“Are you still there?”

Copyright 2003, Jessica K Peterson
Posted by Jesspeterson at 11:51 AM No comments: 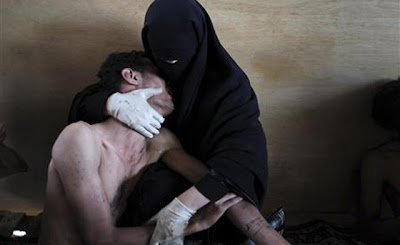 
Source: Al Arabiya
Posted by Jesspeterson at 6:18 PM No comments:

Posted by Jesspeterson at 5:53 PM No comments: