Now I Lay Me Down To Sleep Foundation- Remembrance Photography

I came across this wonderful organization that people need to know about.
Now I Lay Me Down To Sleep (NILMDTS) is a national (and international) non-profit foundation that sends photographers to maternity wards, for free, to photograph babies who have died, or are not expected to survive longer than a few days.
It was co-founded by Cheryl Haggard whose son, Maddux Achilles, was born with a debilitating condition. After 6 days, the family finally chose to end his suffering and take Maddux off life support. But before the tubes and wires were removed, they decided to have local photographer, Sandy Puc', take photos of Maddux before he was removed from life support, and then with Cheryl cradling him after he had passed. This experience inspired Cheryl and Sandy to create Now I Lay Me Down To Sleep.
They have more than 5,000 volunteer photographers worldwide, but are always looking for professional photographers to add to their network.
They believe that capturing these moments can lead to healing,

And what a wonderful way for photographers to give back.
If I ever start working on portrait photography, I will definitely sign up.
Posted by Jesspeterson at 12:08 PM No comments:

Email ThisBlogThis!Share to TwitterShare to FacebookShare to Pinterest
Labels: Giving Back, NILMDTS Now I Lay Me Down To Sleep, Remembrance Photography

The Getty Villa- A Photographer's Heaven 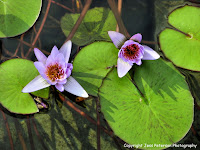 While on a recent visit to L.A., I took a little jaunt to the newly re-opened Getty Villa museum down by the Ocean in Malibu/Pacific Palisades. The grounds are incredible- a photographer's paradise, with something for everyone: from Greek, Roman and Etruscan antiquities to lush roman herb and flower gardens, to reflecting ponds and roman-inspired architecture. Make sure you have plenty of memory and that your batteries are charged.

The grounds are huge and there is much to see, so try to make your reservation early. The earliest I could get was 3 p.m. on a Sunday, and with the grounds closing at 5 p.m. it didn't give me time to see much of anything. They have scheduled tours throughout the day, on a first-come, first-served basis. I took the ground's tour, which was well worth it, and you can't beat the price: free.

Admission is free, but parking is $10.00 per car, and you must make a reservation which can be arranged on-line. Print your tickets and take them with you, as you will be asked for them upon arrival.
The Getty Villa is located at 17985 Pacific Coast Highway, Pacific Palisades, California. It's a little tricky entering the property as access to the museum is only from the northbound right-hand lane of Pacific Coast Highway.

Directions:
Take the San Diego Freeway (405) to Sunset Blvd exit and go west. Take the long winding drive through Pacific Palisades until you dead end at Pacific Coast Highway and turn right (north). Then The Getty Villa will be on your right.
Posted by Jesspeterson at 8:29 AM No comments:

Many Colors, All The Same 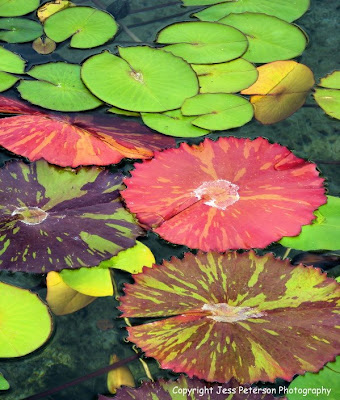 This is one of my most recent captures, at the Getty Villa in the Malibu/Pacific Palisades area. I loved how different all these lilypads were and yet they were all lilypads. I like to see this as a metaphor for life- we are all different colors, and yet we are all human beings. I wish we could act as if we were all brothers and sisters.

Posted by Jesspeterson at 10:16 AM No comments:

Reflection In A Pond 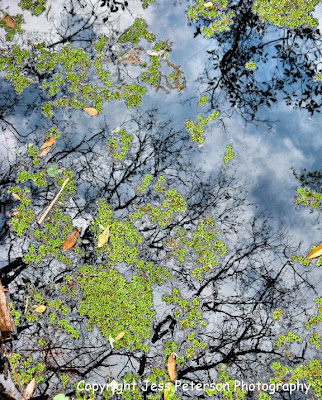 I love capturing reflections in water. This one is in a pond at a nature preserve near Tarpon Springs, Florida. You can see the trees, clouds and sky reflected in the water, and to add texture, the leaves and some green plant life is floating on top.

Posted by Jesspeterson at 2:48 PM No comments:

Paint Shop Pro Photo X2 Ultimate- To Upgrade Or Not

I have Paint Shop Pro X2 which is definitely the poor man's alternative to Adobe Photoshop. It wasn't just the cost that convinced me to purchase PSP instead of Photoshop, but what I perceived to be a much more user-friendly system. I could be wrong, but the choice was made and I will stick with it, for now.

I've been working with the PSPX2 for less than a year and I have to be honest, I'm not thrilled. It's very slow and buggy, so when I read that there was an upgrade, PSPX2 Ultimate, that some people were claiming fixed some of those issues, I was delighted. Although I wasn't thrilled to be paying for what would amount to a patch, and a few extras. I decided, however, to go ahead and purchase it. For a limited time they were offering the Ultimate as an upgrade for those who already had the X2 for $29.99, but frankly, it isn't worth the cost. I think the price has gone up, since.

The Ultimate, comes with a 2 GB USB flash drive (which you can get for $10.00 on sale at Target), a background remover plug in (who cares), Corel Painter Photo Essentials 4 (they just took away all the painter effects from X2 and added them here- and I would rather they were in X2, Media Software Recovery (to retrieve lost photos etc on reformatted memory cards- I could care less), Creative Content Pack with new frames and tubes, but for the life of me, I couldn't find any new frames. That's about it for the Ultimate, and to add insult to injury it's still the same slow, buggy software as before.

If you are considering upgrading to the Ultimate, I wouldn't, but that's just my opinion.
Posted by Jesspeterson at 1:26 PM No comments:

The Need To Shoot- Or - Could You Please Hold Still 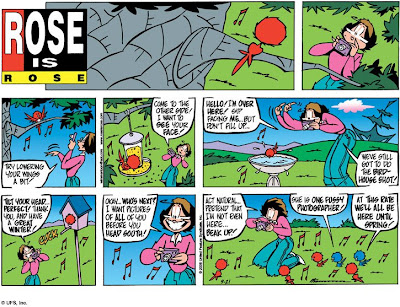 I love this cartoon. It so captures the essence of a photographer's passion and the need to capture everything we see, and the often frustrating times we have with un-cooperative subjects, weather and light.

For an enlarged version go to the source: RoseisRose.com
Posted by Jesspeterson at 10:51 AM No comments: 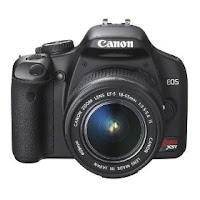 If it's too good to be true, it probably is. A statement, as cliche as it might be, that holds true for pretty much anything in life, including shopping.

When we are in the market for a high-ticket item we all want the best deal possible, and with prices that vary, to a huge degree, between retailers and on-line marketers, the urge to go with the cheapest can often land us in major trouble.
The Internet has made it easier to shop around, and with the click of your mouse you can buy pretty much anything.
I am looking for a new camera and I have been looking into the Canon EOS Rebel XSi. Prices (for the camera with lens) range between $649.00 and over $1,000.00. All these sellers (from camera shops to places like Best Buy) are selling the same item, but profit margins obviously differ for each. So when I saw an ad for the same camera for $409.00 I decided to check it out. Shopdigitaldirect.com was not only selling the camera kit (with lens), their package also included a bunch of other accessories. Sounds great right? Wrong! I wondered why their price was substantially cheaper than the least expensive one, so I googled their website and came up with a slew of complaints. It appears to be a bait and switch operation, which, in the long run, would probably wind up costing you more than purchasing from a reputable buyer.
One of the cheapest places for my camera turns out to be amazon.com itself, not one of their merchants. Dell.com and Circuit City also had some of the cheapest prices.
Your best bet, when it comes to finding the best deal for whatever you want to buy, do your research. Know what you want and then google away. Check some of the comparison sites and then check dealer reputation on resellerratings.com.

Save yourself from being ripped off by being a savvy consumer.
Posted by Jesspeterson at 9:53 AM No comments: 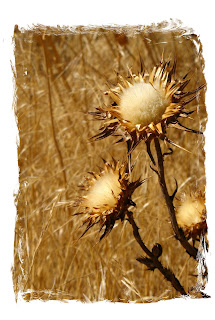 Just got back from a trip to L.A. and took a load of pics.
I decided I wanted to find a place, that might have some different terrain, more stark and colorless than the very colorful flora I usually take, and considering L.A. is so close to the desert I thought I would try and check out some ghost towns.

I asked for some recommendations from a friend, and was told to go to Bodie, California, which is about 4 hours or so from Sherman Oaks, where my sister lives. But, I want to save that (and a trip to Yosemite (which is close to Bodie) for when I upgrade my camera, so it will have to wait until my next trip.

So, I did some research, and the only placec close enough was Mentryville, in the Santa Clarita Valley, about 30 minutes from Sherman Oaks.

Packed my gear and headed noth for Santa Clarita, got off at Lyons Road and drove it until it ended at Mentryville, an insignificant, not very interesting bit of history. It was closed to the public, to boot. But I drove around and took some photos of the surrounding mountains and some very interesting dried flowers. Haven't a clue what they are, even after trying to research it on the net, so if anyone knows what these are, please let me know.

The photo looks as though it's sepia, but this is exactly what it looked like.

Can't wait to go to Bodie next time.
Posted by Jesspeterson at 8:10 AM 2 comments:

The Flora and Fauna OF Alligator Alley 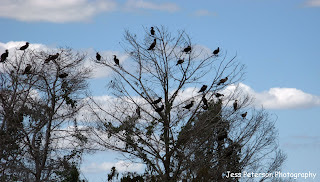 Alligator Alley crosses the state of Florida from West to East and has some interesting flora and fauna.

There are canals on either side of the highway and several accesses to the canals. People boat and fish, so there are plentiful birds.

Took this photo from one of those access sites.

I love the birds perched on the trees, silhouetted against the blue sky.

My favorite shots are tree tops and branches silhouetted against the sky. Something very striking about that.

I will be posting more photos from my drive from Boca to St. Petersburg.
Posted by Jesspeterson at 7:11 AM 1 comment:

Will be going to St. Petersburg, Florida (for 2 months) to do a production of Hamlet, but I'll be taking my camera along with me.

Look foward to seeing what wonderful shots I can get there. The other side of Florida has beautiful beaches and I actually find it prettier than this side of the state. It's less crowded, so there is more nature to take photos of.

I sold 3 photos so far on etsy.com so am delighted about that.

Will try and be better about blogging, at least once I get settled in my new digs.

Jessica K
Posted by Jesspeterson at 10:12 PM No comments:

Thought I would start the New Year with a new blog about my 3 loves, travel, art and photography. Although I am an actress by profession, I adore photography. I have been taking photos for most of my life. I just went digital a little over a year ago, so am still experimenting with that new form. I will be uploading some of my work and talking about my travels, along the way. I'm blessed to travel a lot as an actress, so I have ample opportunities for photo ops.

I spent last October in beautiful Blowing Rock, NC doing "The Glass Menagerie". The highlight of my sojourn there, was being able to drive through the Blue Ridge Parkway and all the other amazing areas surrounding Blowing Rock.

I hope you enjoy my travels and photos as much as I do. And if you want to purchase any, you can visit my shop at Etsy.com
Posted by Jesspeterson at 7:41 PM No comments: