Who doesn't remember the iconic Abbey Road album cover photo of the beloved Beatles walking across a zebra crossing on, obviously, Abbey Road. 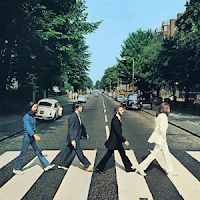 Apparently, Scottish photographer Iain Macmillan was only allowed ten minutes on August 8, 1969 to shoot six photos of George, John, Paul and Ringo while a policeman stopped traffic. Perched on a ladder he took 6 photos of the lads walking both forward across the road (which was the one that made it to the album cover) and backwards. 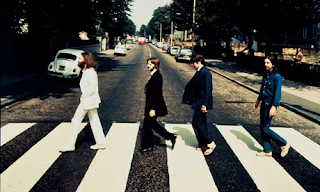 Now, one of the "wrong way" photos is up for auction on May 22 by Bloomsbury Auctions in London, and is expected to sell from £7,000 to  £10,000. Not that much, comparatively speaking, for a 'rare' limited edition signed photograph. Andreas Gursky's "Rhein 11" sold for 4.3 million.

25 copies were made of the up-for-auction photo, and this one copy is being sold by a private collector.

Check out this blog for more details.
Posted by Jesspeterson at 12:11 PM