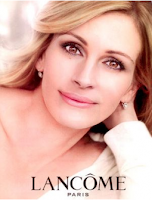 The Julia Robert's photo for  L'Oreal's Lancome ad is beautiful in its own right. Flawless radiant skin, a great airbrushing and photoshop job, but it's not real.  Julia's aging face has flaws, as do all of ours over a certain age, and if an ad is going to tout an anti-ageing product, then you better dang well be sure that there is some truth in advertising.   As a result, Britain has banned both the Lancome ad and a Christy Turlington ad for Maybelline's "The Erasor", a product that claims to cover up flaws.

Liberal Democrat MP Jo Swinson believes the ads are misleading, and rightfully so. If you are creating art, well then photoshop and airbrush away; but when you are advertising a product that can never achieve the same results as your edited photo, then that's just plain deception.  There is a place for minor digital manipulation, as in stray hairs, shadows or blemishes that the subject might not normally have, but  crows feet, or dark circles under the eyes? Nope. If the product claims to rid you of them (and it's highly doubtful it can), then there is no place for major editing.

According to the Guardian UK, to demonstrate what 'The Erasor' foundation can do the Maybelline ad featured certain parts of Christy's face covered with the product and the rest not covered. L'Oreal even admitted that the photo had been


"....digitally retouched to lighten the skin, clean up makeup, reduce dark shadows and shading around the eyes, smooth the lips and darken the eyebrows". However, it claimed there were still signs of ageing, such as crow's feet, and that the image "accurately illustrated" the achievable results.

If I am going to pay good money for a product, I want to make sure that it does what it claims, since my skin isn't going to be 'lightened' and touched up in other ways.  I realize products work differently on different people, but if they have to touch up the image of a beautiful model, than how am I going to fare?


The company, which provided the ASA with pictures of both women "on the red carpet" to show that they were naturally beautiful, admitted that digital post-production techniques had been used on Roberts but maintained that the changes were not "directly relevant" and that the ad was an "aspirational picture".

Good for Swinson. I think we're all tired of aspiring to stick thin, wrinkle-free models when, in truth, those wrinkles and that fat have been photoshopped out and off, by some very talented artists.