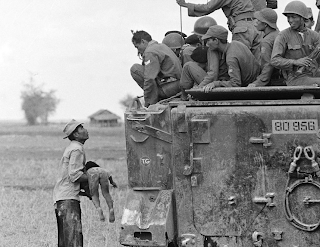 Pulitzer Prize-winning German war photographer/photo-journalist Horst Faas, best known for his compelling mostly Black and White photos taken during the Vietnam War, died on May 10th at the age of 79. His Obit in the L.A. Times says of Haas:

As chief of photo operations for the Associated Press in Saigon for a decade beginning in 1962, Horst Faas didn't just cover the fighting — he also recruited and trained new talent from among foreign and Vietnamese freelancers.
The result was "Horst's army" of young photographers, who fanned out with Faas-supplied cameras and film and stern orders to "come back with good pictures."

The photo above was one of many taken in 1964 that earned him the 1965 Pulitzer Prize for photography. He won his second Pulitzer Prize in 1972 for his coverage of the torture and executions during the conflict in Bangladesh.

He risked his life for his work, and was so severely wounded in 1967, that he was wheel-chair bound for the rest of his life, suffering many complications from his paralysis.

He died in his native Munich, leaving his wife Ursula and his daughter Clare.

Click here to see more of his photography.
Posted by Jesspeterson at 2:56 PM