Born in Israel, Canadian conceptual photographer Dina Goldstein looks at things a little differently. In her Fallen Princesses series she shares the darker side of  Disney Fairy Tale characters. Reversing the "happily ever after" theme that is part and parcel of the Fairy Tales we have come to love, we see what happens to these 'princesses' when they actually have to deal with real life issues including eating disorders, addictions, aging and mental issues and poverty.

So we see Snow White with a brood of kids living in suburbia with her jobless prince, Little Red Riding Hood with a penchant for fast food, Belle getting botox, Pocahontas as an agoraphobic cat lady, an alcoholic Cinderella who couldn't conceive, Jasmine's as a soldier somewhere in the Middle East, Ariel is on display in an aquarium, The Princess and the Pea lives in a landfill, Sleeping Beauty never wakes up while her prince waited and is now old and  Rapunzel getting chemo. 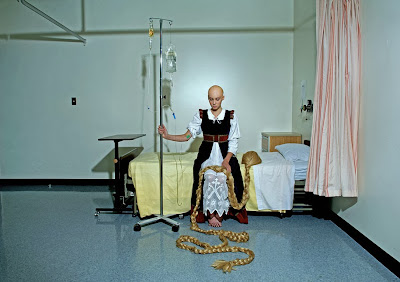 “My daughter was very small and getting into the whole Disney princesses culture, and at the same time my mother was diagnosed with breast cancer (she’s totally fine now). I started to think: what if these princesses had to deal with cancer, or financial discourse, or any of the real-life problems people have to go through?”

“I began to imagine Disney’s perfect Princesses juxtaposed with real issues that were affecting women around me, such as illness, addiction and self-image issues,” says Dina. “With limited funds, I began to assemble my series.”


She has published a book called Fallen Princesses.

She also has a Barbie series, called In The Doll House.

Demilked has all of the photos, and The Daily Beast has more information on Dina.
Posted by Jesspeterson at 9:47 PM