Amateur Shoots Amazing Photos Of The Night Skies With His Telescope

Peter Shah is an office worker in England who fell in love with the night skies ever since his mum purchased him a £5 telescope when he was a young lad. For £20,000 he equipped and set up a makeshift observatory in his garden shed. Some of the photos he took, over the period of several months, are quite astonishing for an 'amateur star gazer'. In fact, his photographs of the milky way, and nebulas and galaxies have been compared to the ones taken by the multi-million
dollar Hubble telescope. £20,000 is an expensive hobby, but he enjoys it. Some people have their telescopes other their cameras. 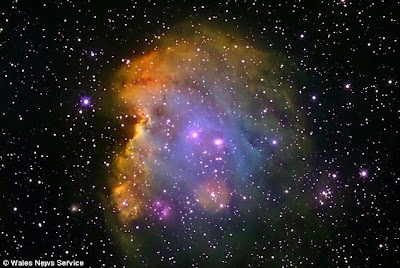 Click here to see more. The above photo is of the Monkey's Head Nebula.
Posted by Jesspeterson at 11:56 PM